TC In 3D: How J. Scott Smith Became A Go-To Partner For Architects, Builders And Developers

Before he was a go-to partner for architects, engineers, builders and property developers, J. Scott Smith was a kid growing up in Traverse City. Now, Smith helps people see the potential future of his hometown through detailed, 3D renderings of projects like Midtown, Uptown, the TC Lofts, Tamarack Lodge and the initial proposal for the Acme Meijer development. 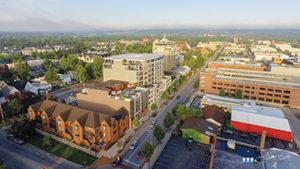 The seeds for his career were planted in high school, where Traverse City Central had one of the first programs for computer-aided design (CAD) in the country. By his junior year in 1989, Smith was already a master in Autodesk’s AutoCAD two-dimensional software.

The skill proved valuable; AutoCAD is still a favored tool among designers. Back when Smith was in high school, though, the software – and CAD in general – was just starting to catch on. Local architecture and engineering firms weren’t even acquainted with it yet, though they were interested. Once Smith graduated high school, he fleshed out his own design skills by working through the tool design program at Northwestern Michigan College.

The path eventually led him to newer, more sophisticated software – programs that could outstrip the 2D limitations of CAD and allow for 3D renderings. In 2001, he launched a business, pitching the idea of hyper-realistic building renderings to local engineers, architects and developers.
Smith got little interest.

“I started reaching out, saying, ‘I’ve found this capability, this software that I really haven’t seen anyone around here use. We should use this to visualize stuff,’” Smith said. “Either people were scratching their heads and didn’t know what I was talking about, or they said ‘Yeah, we’ve heard of that; we’re not interested. The way we’ve been doing things for years is working fine for us.’”

With few prospects locally, Smith looked elsewhere. While Traverse City wasn’t ready for his 3D rendering work, he found plenty of clients in bigger markets that were.

Smith spent the next decade building a successful business almost entirely through out-of-state work, which continue to account for 50-75 percent of the agency’s pipeline.

Local work started to flow in with the popularity of shows like HGTV’s “Fixer Upper,” which showcases 3-D renderings of renovations.

“In the last five to 10 years, there have been all these shows on HGTV where they say, ‘We can fix your house. Here’s what it’ll look like when we’re done,’” he said. “I think that has helped people understand what we do.”

When asked to explain his rendering process, Smith likened it to building a house and taking a photo of it. Many projects start with the same 2D CAD renderings that serve as blueprints for actual buildings. Smith then redraws these designs in 3D, creating one piece of the building at a time and applying different materials, textures, colors and levels of reflectivity or transparency to make sure everything looks right. Finally, Smith adds sunlight to mimic how a building might cast a shadow.

With the project rendered, finished and lit in 3D, Smith “takes” a photo, which is delivered to his clients.
Developers also often work with Smith to make controversial projects easier to visualize for locals. Tom McIntyre’s 100-foot-tall Peninsula Place condominium project next to the Park Place Hotel, is one example.

“Any time that anyone has ever proposed anything tall around here that’s gotten publicity, for better or worse, we’ve done [renderings for] those,” Smith said.

To show people the effect a new building might have on Traverse City, Scott’s company flew a drone around town and created a full 3D rendering of the downtown area. A video of the project can be found online.

Smith said that the renderings he does for developers and the 3D map of downtown TC have the same scale. As a result, he can drop a design directly into the map to give locals a better idea of what the project would look like when completed. This technology helps compare building heights to one another, or show if views will be blocked.

Recently, the company has expanded its services to help real estate companies to create virtual tours of houses. Smith said his company can create virtual walkthroughs both for properties that have already been built and properties that don’t exist yet. These virtual tours can be seen on computers or mobile devices, but Smith has also optimized them for virtual-reality-enabled devices.

With Smith’s company, businesses can develop 3D interior tours that are accessed through Google maps and Google Earth. So far, he’s worked with Nolan’s Tobacco and Cigar Bar and Captain’s Quarters. Most companies that offer Google Street View services do so with photos. Smith says his technology is faster and more efficient, which “results in lower costs.”

(this article was originally published in the Traverse City Business News, April 2018 edition)